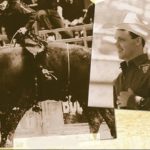 PUEBLO, Colo. ― Before Bo Davis retired from bull riding in 1993, he and Brent Thurman would talk about their post-career plans and aspirations of one day being able to play host to big bull riding events across the country together.

The two Dripping Springs, Texas, natives grew up together in the small town 30 minutes west of Austin and wound up traveling together to rodeos all over the United States with the likes of Cody Lambert, Ty Murray and Michael Gaffney. They were living out their childhood dreams of competing alongside the best bull riders in the world.

However, the longtime childhood friend’s future plans all changed on Sunday, Dec. 11, 1994, at the National Finals Rodeo in Las Vegas.

Davis was home watching his buddy climb aboard Red Wolf in the final round of action when Thurman was bucked off, became tangled and was eventually stepped on by the bull’s hooves.

The next day, Davis flew out to Vegas, but, unfortunately, Thurman never regained consciousness from the facial and cranial injuries he sustained. He passed away six days after attempting to ride Red Wolf.

During those six days, the small town of Dripping Springs, which currently has an estimated population of a little below 2,000, held ceremonies and candlelight vigils in honor of their neighbor and friend. According to a 1994 article in the Austin Journal, 1,800 people paid their respects at the bull rider’s funeral at the nearby Travis County Exposition Center.

Now, for the first time in 16 years, the annual Brent Thurman Memorial Bull Riding returns home to where Thurman spent so many years working toward his dream.

“For the last three years, we have been waiting on Dripping Springs to finish this venue (Dripping Springs Ranch Park Events Center),” Davis said. “It had been in the works for a while; this will be the last place it ever happens. We won’t move again. This is his hometown and they have a super nice facility and, like I said, Brent grew up there and had all of the connections there.

Some of the top names in the sport talk about the legendary career of Brent Thurman, who was inducted into the Ring of Honor in 2011.

“Everybody from that town, if they don’t know him, they knew of him. It was a huge deal for a small town when the accident happened at the NFR. It is still somewhat of a small town legend.”

The Touring Pro Division bull riding event is set for Saturday night at 7:30 p.m. CT, and 2004 World Champion Mike Lee, Harve Stewart and Joseph McConnel are a few of the riders scheduled to compete. There will also be a rodeo event prior to the bull riding at 6:30 p.m.

“If he wouldn’t have died, he and I would have been putting on an event because we talked about it when we were rodeoing together,” Davis said. “I was a little bit older than him, so it was natural that I was going to move forward with our plans.”

Following Thurman’s death, Davis still moved on with their intentions. Except, instead, he wanted to host an event in honor of his late friend. The former PBR stock contractor approached Thurman’s family and, eventually, four years later the Brent Thurman Memorial Bull Riding was born.

For the last 15 years, Davis has worked alongside Thurman’s mother, Kay, to remember and honor Brent and his legacy as both a bull rider and a person.

Beyond being an exceptional bull rider with a unique riding style, Thurman, who was inducted into the Ring of Honor in 2011 and was one of the PBR’s 20 founding fathers, was known for always having a genuine care for those in the community. According to Davis, Thurman once even donated a portion of his winnings from the NFR to the Marbridge Foundation, a non-profit residential community that offers transitional and lifetime care to mentally challenged adults.

“Even at 19, 20 years old he had a soft spot,” Davis remembers. “He would go by there for whatever reason and just fell in love with trying to help them.”

It is one of the main reasons that the Brent Thurman Memorial Bull Riding gives all of its profits to the Marbridge Foundation and other organizations that work in the mental health field.

“When he died, we just stuck with the plan because that was his soft spot and who he liked to take care of,” Davis added.

Along with his caring personality, Davis, along with many others, remember Thurman’s outgoing and fun personality.

“He was just a fun loving kid,” Davis concluded. “That is one of those guys that always had a smile on his face and did not have an enemy in the world.

“He was everybody’s friend.”