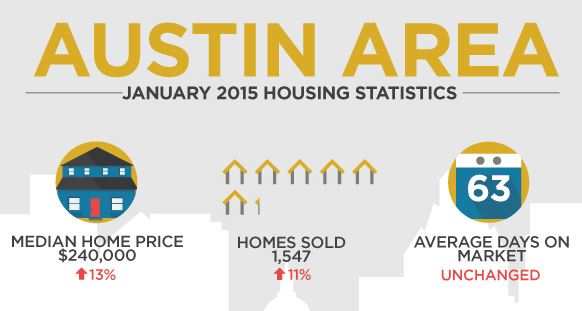 AUSTIN, Texas – February 20, 2015 – The Austin-area housing market started the year strong in January 2015, with single-family home prices reaching all-time highs for the month of January and home sales posting double-digit increases according to the Multiple Listing Service (MLS) report released today by the Austin Board of REALTORS®. This marks the fifth-straight month of annual home sales increases and the fourth-straight month of double-digit gains in home prices, as housing affordability continues to be a challenge in the Austin market.

Barb Cooper, 2015 President of the Austin Board of REALTORS¬®, explained, “With housing affordability already a challenge for many Austin residents, this increasing pace of home price growth is concerning. More than half of the homes sold in the Austin-area are now priced out of an affordable range for much of Austin’s workforce.”

In January 2015, the median price for Austin-area homes increased 13 percent year-over-year to $240,000 and the average price jumped 14 percent to $310,187 during the same time frame. January 2015 marks the highest year-over-year home price increase since September 2013 and all-time high for home prices in the month of January.

“Housing inventory is rising, but the current pace is not enough to alleviate Austin’s affordability challenges,” added Cooper. “Furthermore, more homes on the market will not increase housing affordability if those homes are all priced for move-up home-buyers. Austin needs a regulatory environment that will ensure development of all housing types, priced in an affordable range for all Austin residents.”

Cooper concluded, “While single-family homes will always be a part of Austin’s fabric, Austin’s city leaders should consider housing types that cost less to develop and can allow for a greater range of affordable infill options, such duplexes and small apartment buildings, in neighborhoods where they are needed most. The Austin Board of REALTORS® is hopeful that the Austin City Council will embrace changes to the land development code and permitting process to allow for an abundance of housing in all neighborhoods.”

The following sections describe trends in other sectors of the Austin real estate market.

Townhouses & Condominiums
The volume of townhouses and condominiums (condos) purchased in the Austin area in January 2015 was 135, which is 30 percent less than January 2014. In the same time period, the median price for condos was $218,250, which is four percent more than the same month of the prior year. When compared to January 2014, these properties spent five fewer days on the market, or an average of 48 days.

* The inventory of homes for a market can be measured in months, which is defined as the number of active listings divided by the average sales per month of the prior 12 months. The Real Estate Center at Texas A&M University cites that 6.5 months of inventory represents a market in which supply and demand for homes is balanced.